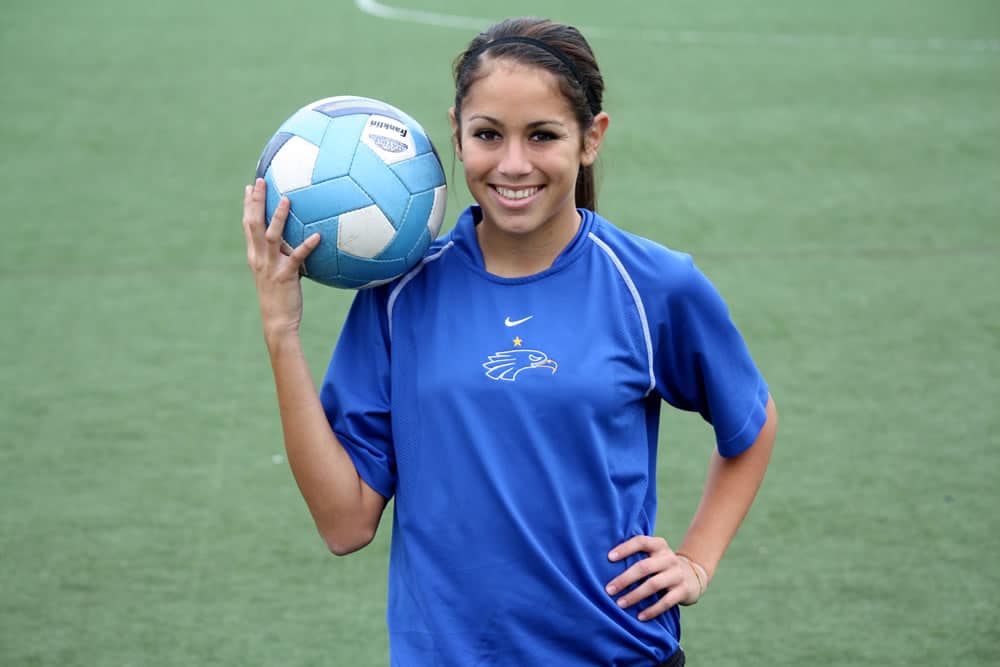 “It did not take long at all for me to get back on the team to help my teammates. It was great!”
– Monique Silva

Monique Silva is a 20 year old, full time college student who loves playing soccer. Monique has been playing soccer since she was small and has such a passion for the game that she never thought of how it would feel to be watching from the sidelines. In an intense soccer match between a rival school, Monique was running for the ball and then all of a sudden felt an excruciating pain in her knee. “The simplest running movement or kicking the soccer ball sent shooting pain through my leg,” said Monique. “I couldn’t practice with my team, I couldn’t run or pass the ball and I had to miss another important game because of it.” This was a devastating injury for Monique because it stopped her from playing the game she loves.

Monique later found that she had strained her knee/pulled her right quadricep muscle and was unable to play soccer until it was rehabilitated. “I was very upset because soccer is something that I love doing,” said Monique. “I didn’t know what to expect with such an injury.”

Seeing as how this was Monique’s first time coming for physical therapy, she didn’t know what to expect, but her expectations were high. All that Monique could think about was getting back on the soccer field to help her team. Monique was evaluated and treated by Richard Coury, PT, MPT, ATC, OCS who noticed right away the leg pain and discomfort Monique was experiencing. “I told her we would get her back on the field stronger than ever in no time,” said Richard Coury. A skeptical Monique underwent a myriad of exercises and received manual hands on therapy at each of her visits. After just two weeks with us, Monique started to feel stronger than ever before. “My quad was painless and the treatments helped me become stronger.” In only one month of rehabilitating with us, Monique and her completely torn right quadrice was able to return to practicing with her team and was slowing starting to add in drills and sharp cutting movements. “It did not take long at all for me to get back on the team to help my teammates,” said Monique. “It was great!”

Today, Monique is back to playing collegiate soccer and is feeling stronger and faster than ever and is performing at a higher level than before her injury. “I’m feeling better than ever,” said Monique. Monique is now back to helping her teammates on the soccer field and is better than ever!

Monique Silva and the Santiago Canyon College Women’s Soccer team, clinched their first ever National Title just a few years ago. Not only was she one of the main contributing factors for her team’s quest to win the National Championship, she was also named First Team All Conference Midfielder!