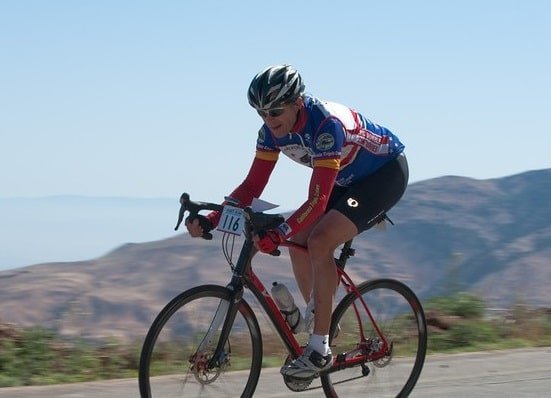 “I knew there was hope in sight that my shoulder would be on the mend before I knew it.”
– Chuck Bramwell

On April 12, Chuck was in a paceline crash on his bicycle at mile 142 of the Hemet Double Century. He fractured his left Scapula in multiple places. His upper left arm was also painful and he had road rash on his hips, elbows, and knees. Chuck found out about Coury & Buehler from looking at the Physical Therapists recommended by his Orthopedic doctor and Yelp.

Chuck recounted his first appointment at the Irvine office, “From the moment I stepped into the Coury & Buehler office in Irvine, I knew there was hope in sight that my shoulder would be on the mend before I knew it. My physical therapist was Dr. Ruth Meltzer who was just the best. She was kind but always extremely positive and incredibly knowledgeable about what I was going through. It was not easy … nothing good ever is.” Chuck described the positive environment that allowed him to heal his shoulder injury, “Each time I went to C&B, I left being lifted up after being surrounded by super positive people. The 19 sessions I completed with Dr. Ruth took my left arm from being totally wiped out to it being 99% recovered today!!”

With Ruth and the CBPT team, Chuck’s shoulder and arm responded super well to the exercises that he did in morning, afternoon, and night and continue to do at home. Chuck’s passion is long distance cycling and is the Executive Director of the California Triple Crown. He was even able to complete a 200 Mile Bike Ride in July, just 3 months after this horrible crash pain free! Chuck says, “How cool is that? I’d say MIGHTY COOL and I couldn’t be happier with my recovery at age 63. I’m a big fan of Coury & Buehler and would highly recommend your team to anyone.”